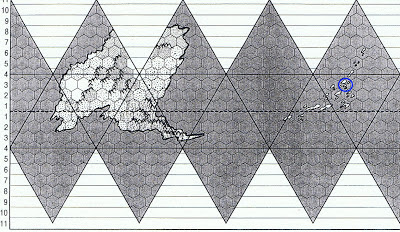 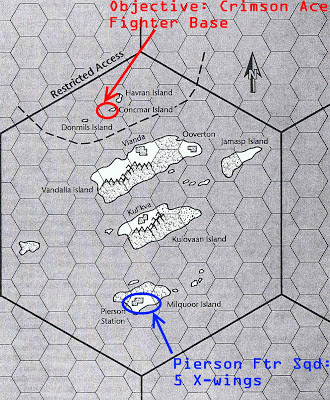 Based on information provided by members of a Tarsan Diplomatic Security Team, TAg Market Facility managers agreed to launch a pre-emptive strike against the Crimson Ace fighter base on Concmar Island.  The purpose of the strike was to prevent Bongolaanian forces from obtaining air and space superiority over the TAg Market Islands.
The Tarsan Security personnel did not want their names or ship (an armed YT-1300 transport) to be identified in this report, but volunteered to join the strike.  An electronic warfare pod was attached to their vessel and was assigned to follow Squadron Leader Shamira's X-Wing on the attack run.  The station's remaining 4 X-Wings were also readied for action.
The 6-ship formation took off before dawn and flew nap-of-the-earth (NOE) in a circuitous route to the objective. 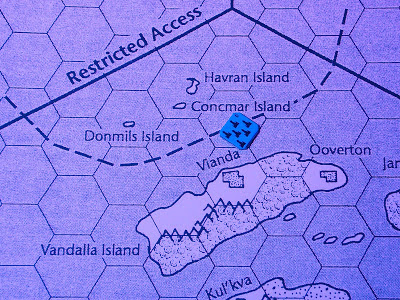 Due to on-going diplomatic talks, the Crimson Aces were ordered to stand-down, so all their TIE Fighters were on the ground.  However, the base was protected by two Surface-to-Orbit Artillery (SOAs--mobile blaster cannons). 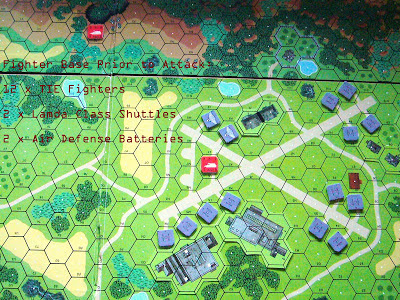 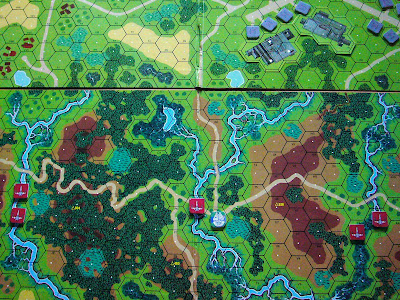 The attack achieved complete surprise.  Five TIE fighters and a Lambda-Class Shuttle were destroyed on the first pass. 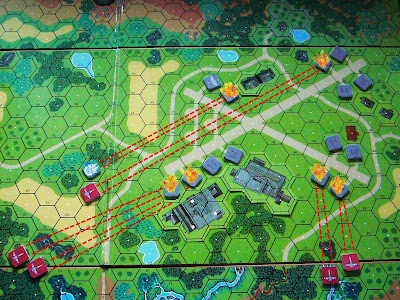 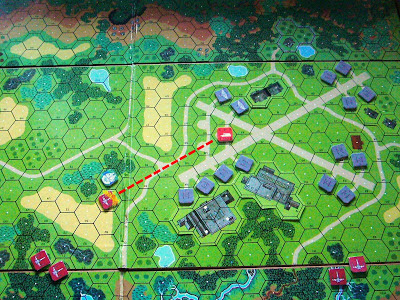 Five more TIE Fighters were destroyed in the second pass.  Flight Leader Shamira managed to get off some shots at the second SOA vehicle, but not before receiving more damage to his X-wing.  Lieutenant Adva's fighter was also damaged by blaster fire from the central SOA weapon. 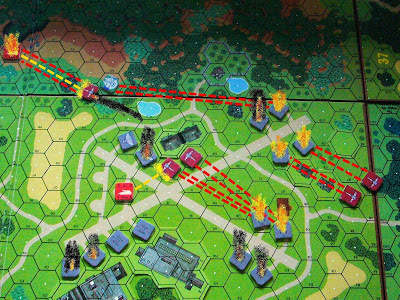 Another volley of blaster fire damaged Lieutenant Tsvi's X-Wing as the formation egressed from the target area.  Grazing fire from the SOA vehicle destroyed the electronic warfare pod strapped to the YT-1300 freighter. 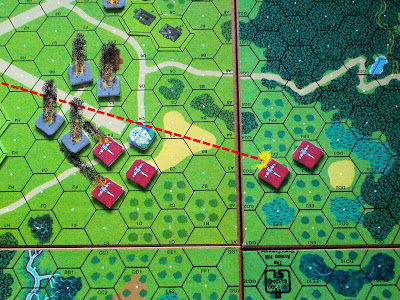 The pilots of the damaged X-Wings were forced to ditch near the southern tip of Kulovaan Island.  The remaining ships landed at Pierson Station without incident.  The crew of the YT-1300 insisted on readying their vessel for space flight and took off within hours of landing.  Their destination remains unknown at this time. 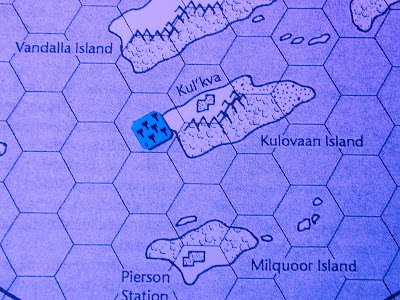 The three pilots who ejected were picked up by GPV-254 (Grav Patrol Boat). 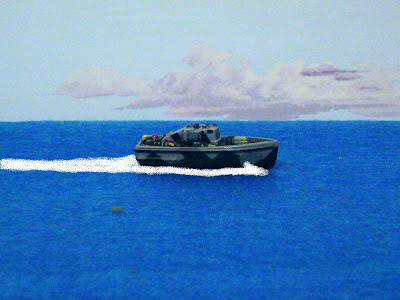 While only 2 X-Wings remain serviceable, the strike was deemed successful in neutralizing the Crimson Aces' presence on Zenya.  Post-strike BDA (Battle Damage Assessment) indicates the remaining craft, 2 x TIE Fighters and a Lambda-Class Shuttle, received at least minor damage.
While successful, less than one-quarter of the Crimson Aces mercenary unit was with hired for by Bongolaan.  It is likely the remaining personnel will want to opt-out of their contract and return to their headquarters.
GM's Note:
The game boards were from Squad Leader, while the starfighter pieces came from Star Warriors, while I used two pieces I made from Grav Armor to represent the air defense artillery.
Posted by Ted Henkle at 5:30 PM 2 comments:

Email ThisBlogThis!Share to TwitterShare to FacebookShare to Pinterest
Labels: After Action Reviews 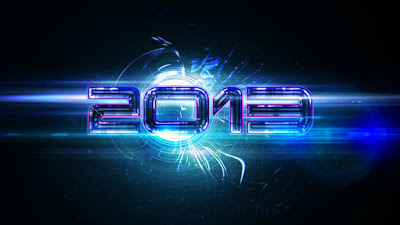 In late 2011, I spun this blog off from Stern Rake Studio to provide a focus on the gaming, activities, updates and overall tabletop mayhem of my Redshift Campaign.

My purpose of starting this endeavour was to bring out as much of my science fiction gaming material and miniatures into the light-of-day as possible.  Everything from roleplaying (RPG), in the form of the Star Wars Saga Edition RPG, (soon to be superseded by Edge of the Empire--Beginner Game)  to small unit actions (Stargrunt II or FUBAR), to large-scale planetary battles (Dirtide II or Future War Commander), and even fleet engagements (Full Thrust).

Another goal of mine was to post a chapter per month of my initial webcomic, Breakout from Bongolaan, which will provide a detailed story of the initial Redshift adventure.

...despite reaching the 130 day point of the campaign, I haven't advance much past the RPG level at this time.  Running an on-going RPG campaign proved too much for my players and I to maintain.  As a result of this demise, I spent a lot time re-evaluating my skills, or lack thereof, as a gamemaster.

My "cunning plan" to post a chapter-a-month of Breakout proved to be overly optimistic.  Normally, graphic novels are collaborative efforts between writers and artists.  Whereas I'm a one-man cantina band.  Compiling pictures and adding special effects (explosions & blaster bolts), along with conjuring up a coherent narrative and dialogue has taken far more time to do than I originally estimated.  And that's if I have the time to do all this.

Finally--life got in the way.  My girlfriend's son got married in August and her mom passed away, after suffering from a long-term illness in October.  So 2012 has been a year of joy & sorrow for both of us.

Plus there were other game projects I wanted to complete before this old year passed.

For starters, I'll set a more modest goal of posting 1 chapter every two months for my webcomic.  Since there are three subsequent adventures, this will keep me busy for years to come.  In the meantime, readers can get an overview of past adventures by reading this blog's past News Briefs, Intel Briefs and other appropriate postings.

War is about to erupt in the galaxy far, far away.  My plan is to conduct the strategic encounter solitaire and then post an invitation to fight a miniatures battle to my gaming group.  If scheduling a game proves too difficult, then I'll resolve the tactical battle using one of my sci-fi boardgames in my collection.

Finally, I've come up with another "cunning plan" to resurrect the RPG aspect, of sorts.

A few weeks back the RPGers of our group held a Council Meeting, in which we laid out a plan for what RPGs we wanted to play and who would gamemaster them.  Because my rotating work schedule continues to be a problem, I thought I could conduct an episodic bounty hunter campaign.  That is, run unconnected adventures in which player characters (PCs) will decide what posted bounties they'll pursue and bring in--dead or alive.

My proposed Bounty Hunter Campaign was well received by the group and the idea is conduct game sessions in between any scheduling gaps that may occur.

So here's to making more modest, but steady gains in 2013.

Best wishes to all of you throughout the New Year.  Thank you for your interest and readership.