My cynicism towards Warhammer 40000 (WH 40K) hasn't stopped me from amassing a large collection of figures, vehicles and terrain.

My earlier Pass in Review posts included the following factions--

--The Adepta Sororitas ("Nuns with Guns"), and recently,

None of these, however are the centerpiece of my collection.  You could say I'm working my way up to a finale, so to speak.


I've always been moved by stories about ordinary people in extraordinary circumstances.  And you don’t get any more ordinary than the common soldiers of the Astra Militarum in the extraordinary “...grim darkness of the far future..."

As I acquired vehicles and figures, I set out to create a unit with a unique history that wasn't a copy of a  storied regiment already annotated in the annuls of the Imperium of Man,  Nor did I care for the idea that the troops would be typical 41st Millennial cannon fodder either.

Finally, I wanted my centerpiece unit to serve as a tribute to the military service of my family and our overall heritage.

So I set out to raise a fully tricked-out mechanized infantry regiment.

What to call my ordinary unit turned out to be an extraordinarily easy decision.

My father was a Korean War combat veteran, and served with the 187th Airborne Regimental Combat Team (ARCT).  Which meant the numbers "187" would come into play.

The WH40K ‘verse is known for worlds able to raise specific unit types, like the Tallarn Desert Raiders, and the Catachan Jungle Fighters, etc.  Delving into the game’s fluff, I discovered the planet Jouran had a knack for raising "dragoon" regiments, which was a term commonly used during Earth's “Horse &amp; Musket Era.”

Initially, I was going to call my unit the 187th Jouran Dragoon Regiment.  But because I bought nearly everything second hand &amp; pre-painted, or hired others to paint and assemble box kits; my collection lacks a uniform color and camouflage scheme.  Since I'm too lazy I have no time to repaint anything, I'm going to assume the original regiment received, and continues to receive, reinforcements and replacements from various other Astra Militarum units.

And so, the 187th Dragoon Regiment (Composite) was born.

As a fan of the Black Library’s Ciaphas Cain novels, I envision the narrative of the 187th DR(C) to be something like:  Hammer’s Slammers meets F-Troop.

Anyway, after Googling extensive research, I stumbled across the heraldry of the real 187th Infantry Regiment: 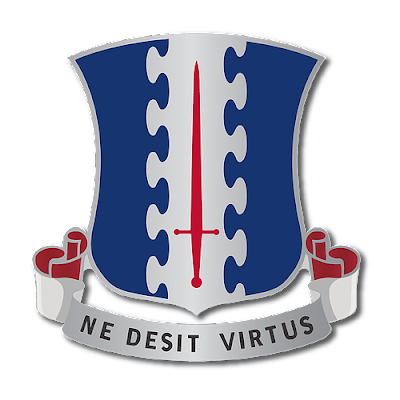 I liked it so much, I adopted it wholesale.

Even the motto is applicable to WH40K’s grimdark setting—and in real Latin—no less:

I had the flag of one of my standard bearers painted in a close approximation of the 187th Infantry's crest: 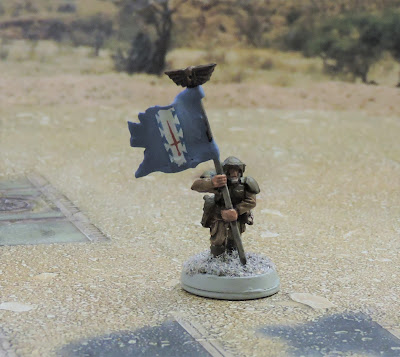 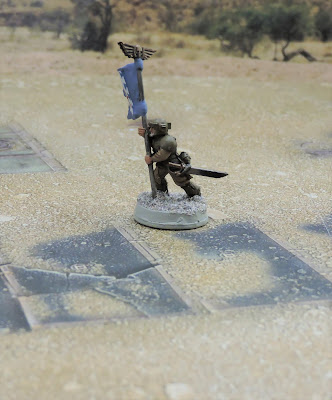 This is an old metal figure.  The weight of the standard made the figure top-heavy, so I glued a washer to it's base in order to provide balance.

Now getting back to the future-history of my regiment:

Last year shortly before St. Patrick’s Day, one of my siblings had a DNA test done.  We discovered our genetic makeup was 43% from Scotland, Ireland and Wales.  After more Googling extensive research, I stumbled across the war cry:  "Faugh A Ballagh!" (Clear the Way!), used by various Irish-manned units in pre-2nd Millennial America and Great Britain.

This certainly sounds like an appropriate phrase for mechanized infantry soldiers to holler during the din of battle, even 41 millennia into the future.

Speaking of battles:  I grew up watching the movie, To Hell and Back and did a short stint in Iraq with Audie Murphy's unit the 3rd Infantry Division (3 ID) back in 2003.  This makes me rather partial to the song Dogface Soldier.  So I made this tune the Regimental Song (with the necessary WH40K adaptions to be determined later).

Overall, the basic “SO&amp;E” (Slate of Organization &amp; Equipment) of the 187th consists of the following:

The regimental headquarters is centered around a handful of Chimera command and control (C&amp;C) vehicles, along with support assets, like recovery and supply vehicles.

The mechanized infantry battalions consists of three companies of 10 Chimera armored personnel carriers (APCs).  Nine of the Chimeras carry an infantry squad consisting of 6-12 soldiers, while the tenth one is the company command and control (C&amp;C) vehicle, sporting extra communications gear.

The reconnaissance company is smaller and more streamlined.

The 187th’s "R Company" consists of 3 x Chimeras and 3 x Lehman Russ Annihilator tanks.  On paper, this is organized into 3 platoons consisting of 1 x Chimera with 4-8 dismounted scouts/snipers and 1 x Annihilator to provide support and overwatch fire.  During operations, the troop's deployment could vary depending on the mission.

The 187th also has an unofficial nickname derived from the term “(Composite).” Because the regiment receives personnel and equipment replacements of dubious quality, veterans feel their regiment is a dumping ground for other units to pawn off their undesirables.  So the rank-and-file, substitute “(Composite)” with “(Compost).”

Outside the hearing of commissars, of course.

But this unofficial moniker is also a source of pride as well:  Soldiers refer to themselves as “The Composters”—as in making garbage out of their enemies.

(Hey, this wouldn't be WH40K post without some Imperial bombastic proclamations).

I'm currently conducting photo shoots of my collection, so pictures will be posted shortly.